Reflections from a recent walking tour of sites of white privilege and black resistance along the path to racial justice.

I welcomed the first crisp, cool Saturday morning with a walk around Old Town Alexandria. I wasn’t alone, invited to join a walking tour by our Presbyterian friends at the Reformed Institute. As much fun as it is to shop and dine in Old Town, we didn’t hit a single restaurant or store. We ignored the art galleries and walked right past the pastry shops and the smell of fresh-brewed coffee. This was a very different kind of walk. 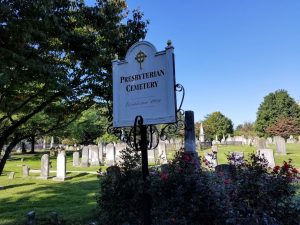 “A Reflective Experience in Power and Social Justice.”

Presbyterians and Baptists exploring together the racial history of Alexandria from colonial days to the present. We began our tour among the dead in segregated cemeteries where wealthy slaveholders were just as dead and forgotten as the slaves that they bought and sold. The passing of time has weathered away most of the names and dates. Only our guide could fill in the details, stories of accumulated riches and downtown mansions, wartime losses and postwar litigation. Sagas of field hands becoming freedmen and contraband becoming citizens, the history of dignity bought with blood and the price demanded over and over again. 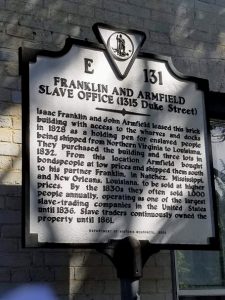 Having paid our respects to the dead, we hiked a few blocks along Duke Street to the Freedom House Museum, a three story building used as a holding pen for hundreds of slaves, bartered in Virginia and shipped off to Mississippi. Two business partners making a fortune from human bondage. Then, it was down to Washington Street where the Confederate Appomattox statue stood defiantly in the median until it was removed three months ago.

Our trek across Old Town was highlighted by three remarkable churches. Alfred Street Baptist Church has always been a powerhouse in the struggle for human rights and racial justice. Beulah Baptist Church, founded by Rev. Clem Robinson, established the first theological school for former slaves during Reconstruction. What a contribution! Then, we arrived at the Old Presbyterian Meeting House, a colonial church founded by city fathers, with prominent slaveholders, some slave resisters, and some black congregants. I was fascinated to hear their early struggle to reconcile their culture with their theology. 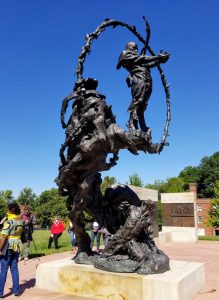 Our last stop was the Freedmen’s Cemetery and Memorial. This burial ground established by the federal government in 1864, had been neglected, forgotten, and desecrated for generations and was finally reclaimed by historians and archaeologists beginning in 1987. Five hundred and forty graves were found, more than half were children under the age of sixteen. In 2013, the cemetery was rededicated and the memorial was completed soon afterwards. The looming sculpture speaks with raw emotion, a voice for the voiceless.

I must conclude this post with a confession. I don’t recall much of what our excellent docents described for us at each stop this morning. The problem wasn’t the noise on the streets or competing conversations among my colleagues. What distracted me were the whispered voices from the past, the echoing cries of children, the strident speeches of abolitionists, the courageous calls for justice, pastors pleading for human dignity. As I walked among the headstones and shuffled down the streets, I could hear their voices and I wasn’t sure how to answer, stammering out, “I hear you. I hear you.”

Before we departed, we prayed together in the words of Martin Luther King, Jr.:

“Ever present God, you called us to be in relationship with one another and promised to dwell wherever two or three are gathered. In our community, we are many different people; we come from different places, have many different cultures. Open our hearts that we may be bold in finding the riches of inclusion and the treasures of diversity among us. We pray in faith.”

If you are still wondering what all the fuss is about and what all this history has to do with today and why people would take to the streets and what’s so bad about the status quo, let me make a suggestion, my friend. Take a walk. Take a walk and listen and learn. As William Faulkner put it, “The past is never dead. It’s not even past.”