Once again, police negligence and criminality have been justified under a cloak of legality. The Breonna Taylor adjudication was reprehensible since it justified the shedding of innocent blood, the result of reckless police incompetence and corruption.

Sociologists are well aware that such an outcome is a function of historical, psychological, and sociological factors in any social system, without exceptions. The United States has a dismal track record with respect to the treatment of African Americans, one in which church leaders and political leaders have been complicit. From the research of W.E.B. Dubois in 1899 across many generations of scholars, including legal scholars such as Jody David Armour, Richard Rothstein, and others, truthful citizens and scholars have recognized the horrible, diabolical legacy of systemic racism. No misguided president, ignorant attorney general, or nefarious politician can supersede the cumulative legacy of scientific truth. In the history of humanity, science trumps the vested interests and shenanigans codified in the deterministic assumptions of laws. Laws are anchored in the precedents of the past, while science probes the tested evidence that exceeds all ex post facto predilections. Without an inviolable adherence to biblical justice, the laws of any social system enable dominant groups [namely, the rich and powerful] to conceal the motivations behind their corruption [Matthew 23].

On a biblical level, Proverbs 6:16-19 tells us that the Lord of glory hates the shedding of innocent blood–with no exclusions for police, patriots, pundits, and politicians in any society. He hates coverups, too [Ezekiel 34], without any exception for the United States or intellectual dullards in positions of authority or jurisprudence. African Americans have never experienced liberty and justice for all. Collectively, they have never had equality in a social system established in slavery. No amount of duplicity and educational chicanery can obviate this truth. Any reputable scientific inquiry could easily indict the United States for slavery, kidnapping, rape, and injustice against African Americans, for the empirical evidence is overwhelming. The dominant narrative of liberty is a cheap deflection away from the exploitation of generations of African Americans, from the racism enshrined in the U.S. constitution to the Dred Scott decision to Plessy versus Ferguson until the police murders of today. To wit, adequate restitution has never been made for generations of African Americans who have suffered from misguided and scientifically dubious Supreme Court decisions! Strange fruit indeed proliferates across society and church for those who are ignorant of the truth, as were those in Germany who swallowed Nazism.

Biblical justice demands tangible atonement, restitution, and redemption, far beyond the superficial fads of reconciliation. The tragic corruption so evident in police murders can only be justified by those adherents of the apostasy of human injustice whoever they are and wherever they exist. As Reverend Dr. Martin Luther King, Jr. warned us before his wicked assasination: Injustice anywhere is a threat to justice everywhere. Justice is coming for Breonna Taylor, George Floyd, and so many others [Psalms 2 and Psalms 110]. It will not be biased by vested interests, idiocy, ideology, popular culture, legal legerdemain, and corruption. All humans will see it happen. Hallelujah! 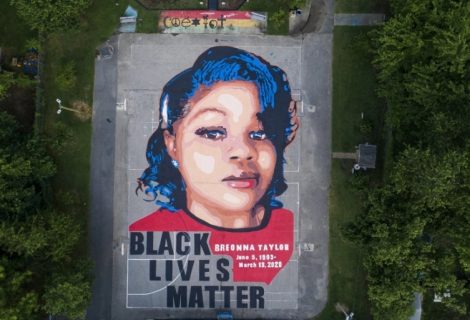 IJF Advisory Group: Reflections on the decision in the Breonna Taylor Case